I've come to the conclusion that if you don't get out now you will never have the chance again. I remember when the UK joined the Common Market and at the time I thought this quite a good idea but what it has grown into is not, in my opinion, what I expected it to grow into. I won't be around in 20 or 50 years time but I expect the idea is that by then there will be no British Parliament nor any parliament in any EU country. As my late husband would say they have you by the short and curlies.
Life doesn't have an undo button
Top

Nobody can say if Brexit is a good or bad thing.

What I can say is that it was voted in by a majority of the people who actually cared enough to vote.

All the weasel words of the losing remainers do not alter this fact.

If the referendum is overturned by the minority, you no longer have a democracy.

This bothers me much more than anything.
Top

Correct, beachbum.
No point having a referendum if the powers that be don't like the result so can just call another one till they do get the result they want.

The majority voted to leave, so leave.

Big changes are always a bit nerve wracking in anticipation but you just have to work through that.

Personally, I think leaving is probably going to be more of a good thing than a bad thing for Britain but you'll never know if you don't give it a go.
Top

the people have spoken
STAY CALM AND SANDDANCE ON
Top

I suppose there is an inevitabilty that we will soon have a General Election. It may turn out that it will not change the voting numbers on Brexit very much, but it hopefully will clear some of the dead-wood out of the House. Too many tired old faces with tired old arguments... Lord Young, a Government Minister in the Lords resigned today - for God's sake his is not far off 80 years old! I'll be 75 soon myself, but there comes a time in life when one needs to go and let someone else have a go. A clear out is long overdue.
Top 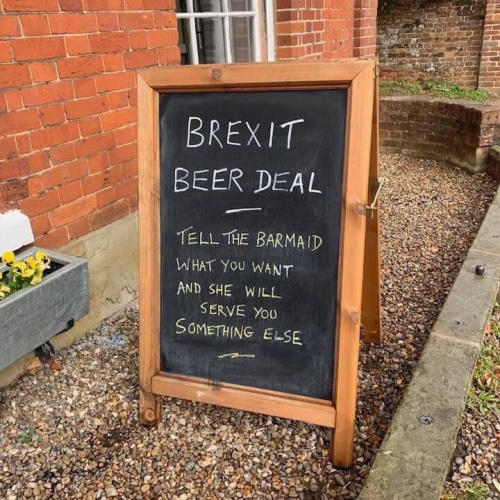 That picture about sums it up Champion. I watched the Parliament Channel yesterday from 12 noon until Parliament was prorogued in the early hours. The 'Remainers' have made the Country ungovernable. They won't even let Boris call an election without trying to impose conditions that ensures they win with BREXIT.

My own hope is that when we do finally have an Election, there will be a thorough clean out of the tired old dross that is clogging the place up now. I see that Harriet Harman, so called 'Mother of the House' has said that she put herself forward as a candidate to replace the present Speaker Mr Bercow... Yea Gods, why can't they just go away and give others a chance. She's an MP as is her husband, her late and unloved Uncle Lord Longford was a plague in the system for years... It may be that Guy Fawkes had the only real plan that could have got some of them out of there.

Brexit, election's MPs acting like spoilt brats and old mary's. Trump blowing is trumpet again, great guy him, no messing around. Royal family sunning it up whilst I shiver and get drenched. just got back from a while in Canada, great place unlike the UK at the moment.

MInd, this election will be worth watching. Father Christmas never had it so varied.

A nice lobster lunch and a few bevvies will sort anything out. That's my motto.
GB FIRST
Top


A nice lobster lunch and a few bevvies will sort anything out. That's my motto.

Doesn't seem to be working for your politicians. How many lobster lunches must they have worked through by now?
Or maybe they're eating snails.
Top

We've brought a new coin out to commemorate Brexit... Are you there yet?
Top

Well, that's the election over and a resounding defeat for 'The Remainers'. We had a clear case of the minority making a hell of a lot of noise. Now all we will hear is moans and bitter cries of "You just wait, it will all end in tears!!!