by memor
I remember the Regent I almost lived there.

When I was little my Mother said to me would I like to see a film about Horses and of course I said "yes."

How shocked I was , when the picture she wanted to see but didn't want to go on her own was "GIGI"

The plaque at the Regent was in memory of the people who took cover under the outside canopy during an air raid and were strafed my machine gun fire from the passing German planes. .... gits.

by jeff
Thanks for all the responses to my queries, they have been of great help.
Looking at cinema architects in particular those with local connections.

The Regent was designed in the South Shields offices of Morton and Son (J H Morton) by J Cecil Clavering who subsequently made a name for himself with Harry Weedon designing cinemas for Oscar Deutsch (ODEON) in 1935, starting with the one at Kingstanding , Birmingham and which set the pattern for many subsequent Odeon buildings.

Joseph Hall Morton was the architect of the Grand Electric Palace , which I believe was the first purpose built cinema in South Shields in 1910 and possibly the first with talking pictures in the town. His other Shields cinemas were the Regent and the Palladium (Harton).

His other architectural claim to fame was his successful designs for a number of Workhouses around the midlands and north of England.

One other local architect with input into cinema design was Joseph W Wardle with several in South Shields and also the Empire at Consett.

jeff wrote:One of my interests is in researching the history and location of old cinemas,(the buildings, architects and owners rather than the films which were shown there) particularly those no longer with us. My links with the North East and South Shields is through my wife's family but we rarely get to visit South Shields.
I recently purchased Doris Johnson's book "The cinemas of South Tyneside" and it really is a gem. The only drawback as far as I am concerned is that she does not always specify the location of the cinemas and as I am trying to plot them all I have some difficulty with some of them. Some I can make educated guesses at.
A number of questions now arise for which I am seeking help.
Where exactly in Ocean Road was the Grand Electric.
Is the Regent still standing at Westoe and where exactly is the location.
Black's Regal/Odeon Regal etc etc. What was the significance of Black's

Finally one for Sherri. Can you tell me what has been done, if anything , about The Palais in St Kilda?


For some interesting information you may want to try -

This is a great site, thank you Sanddancers. I don't tell you that enough

jeff wrote: Where exactly in Ocean Road was the Grand Electric.
Is the Regent still standing at Westoe and where exactly is the location.

The Grand Electric was on the same side of Ocean Road as the Marine College,
that is the left hand side of Ocean Road when heading for the beaches. It was
just before you got to the Savoy Cinema.
The Regent is still standing I believe, but ceased to be a Cinema many years
ago. I took my first ever date there, can't remember what the film was which
was showing at the time, that was way back in 1953.
The Regent was located at Westoe.

I was told by my Nan that Black's got its name from the fact that Leo Black {Also known as Blackstock,Blacklock or sometimes Leo Martin} used to play the piano there in the silent days.

by ralph
It's strange the things that stick in your mind about the various cinemas, such as: the square clock in the Savoy, glowing marzipan green in the dark, the gorgeous ceiling in the Gaumont - a real touch of luxury there. The 'grotty' seats in the Plaza - the ones at the front of house being really just benches with backs, the stamping of feet when the film snapped and shouts of 'Put a penny in the meter.'

I saw my first 3D film at the Picture House/Essoldo - just stick like cartoon figures - but it seemed like a miracle then. And there was the smoke drifting the through the beams of light from the projector and the occasional smell of burning as someone's lighted dog-end set their seat on fire. The illuminated organ rising from below the stage at the Odeon... and my most memorable experience? Standing in a queue outside the Odeon, during a thunderstorm. Lightening struck the chimney of a building across the road (I think it was Lloyds Bank). The noise was horrendous, followed by shatterd bricks crashing down into the road - as a 'special effect' they don't come much better! 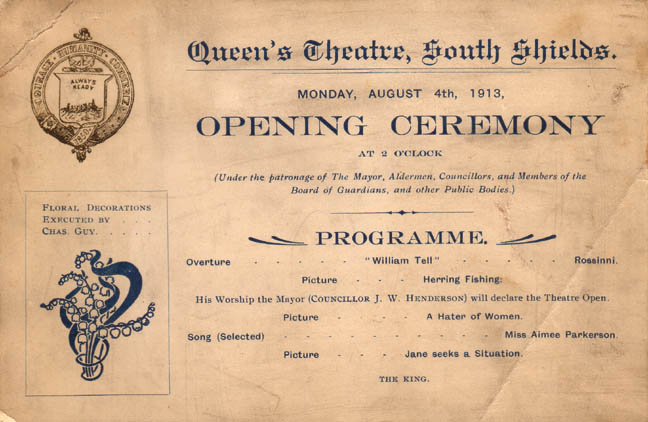 Queens Theatre Opening Invitation Card
An invitation card for the opening ceremony of the Queens Theatre Mile End Road, South Shields, Dated Monday 4th August 1913 by the Mayor Councillor J. W. Henderson. The Queens was destroyed by a German bomber raid in the 2nd world war and stood (I think) about where the multi-story car park is today

by siam sam
i rember it stood opposite the gaumont cinema in mile end road.

by jeff
Does anyone recall whether any of the Shields cinemas had Theatre Organs installed? Compton, Christie, Wurlitzer ?

Nothing mentioned in Doris Johnson's book as far as I can see.

jeff wrote:Does anyone recall whether any of the Shields cinemas had Theatre Organs installed? Compton, Christie, Wurlitzer ?

Nothing mentioned in Doris Johnson's book as far as I can see.

Quite a few of them had Jeff, they used to be played between shows and at intervals.

by ralph
I remember the Odeon organ rising from a pit in the stage, lots of glass and lit up from within.

by siam sam
my late wife's cousin, les lee, used to play it on saturday mornings.

by passtheball
Can any reader please oblige with photographs of the Pavilion cinema at High Shields, and any photographs of the houses that were on Station Road opposite to what is now B & Q, and are there any views of the 'Slaughter House' available, situated where the South Tyneside police command centre is now, plus a view of Jack Stamps newspaper shop opposite the Lord Clyde pub and lastly anything of Wilson Street top end near to where George Rossiter's joiners business was ......? Many thanks wherever possible. Bit of a 'shipping order' really, but would be really good to see again and nice to have for family history research.

by passtheball
Many thanks once again Mr Smith, kind of you to oblige. I shall continue the search for a general view of the entrance to the slaughter house on Station Road, Jack Stamps paper shop on Cuthbert Street, and views of Wilson Street, just might to out there somewhere ....

by Mr Smith
There is a photo of the Gatehouse at the entrance to the slaughterhouse from about 1983/4 but
that's all that is on it.

by Delilahcat
Interesting to see the name of a family member George Rossiter. He had a Cabinet Makers business near where the Lord Clyde stands now. Originally my great grandfathers business. There are a lot of Cuthbert St scenes on the William Clavery DVD. Seen it on Facebook several times.

by jeff
A long time since this page was opened!

Looking at my copy of Cinemas of South Tyneside (D Johnson 1992) I see that the Theatre Royal was used for films from about 1921, but its history as a theatre goes back much further. I recently came across a reference to its origins in about 1866 when the architect for its design was C J Phipps who was later to become one of the most prolific and leading theatre architects of the Victorian era. What is particulrly interesting about him from my point of view is that he designed the Theatre Royal in Bath, his first theatre design commission as a young architect, after the disasterous fire of Good Friday 1862 when the theatre was totally destroyed except for the outside walls. The new theatre, designed by Phipps was opened just 12 months later.

My question is this. Is the reference to C J Phipps as the Shields Theatre Royal architect an accurate one? Can anyone help on this please?
All times are UTC+01:00
Page 2 of 2