Any suggestions for who should take the role if Brosnan is pensioned off?

The film, which was scheduled for release November 18, 2005, will not be hitting cinemas in its traditional November slot as originally planned reports Comingsoon.

MGM confirmed that the studio have not yet been able to find a director for the action film. A lead actor to play 007 has also not been finalised.

Producers reportedly are planning to meet next month to decide whether to aim for a Summer 2006 or November 2006 release date.

The script will be written by Neal Purvis and Robert Wade, the team that wrote d*e Another Day and The World Is Not Enough.
Curly's Corner Shop, the blog
South Shields Daily Pictures
Top

i heard they might get hugh jackman, dunno if he could pull off the character but it would be interesting to see
"Hasten to drown into beautiful eyes"

To be honest, I'd never heard of him!
Is this him?

Just watched him in Cellular
and he is kinda cool

and how good was he in lock stock
Top

Err, I don't know these guys, can you post a picture to help me out?
Curly's Corner Shop, the blog
South Shields Daily Pictures
Top

Is that because of an accidental discharge of a Walther ppk?

Some of the guys you mention may be able to act, but can they do this?

(Be prepared for a long load and turn the sound on)
Curly's Corner Shop, the blog
South Shields Daily Pictures
Top

How about a complete change? 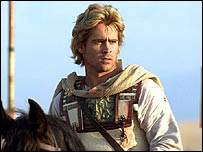 Well it won't be this bloke either!!

and he's up for thrilling the ladies.

I think the finger he puts in his mouth is licensed.
I always value Pilots wit and input
Top

Don't you think his age and his accent might go against him?
Despite him being a very "upright" actor?
Curly's Corner Shop, the blog
South Shields Daily Pictures
Top

As long as he is British, I really don't care. Nothing worse than having an American actor try to do the stiff upper lip British accent! LOL
It is better to keep your mouth closed and let people think you are a fool than to open it and remove all doubt.
Mark Twain
Top

Hold on a second. Anyone know where I can get an application form ?
I always value Pilots wit and input
Top

With a good make up artist (10 hours at least)

When I threw my hat it bound to land on those coat pegs she's got on her chest.
I always value Pilots wit and input
Top

I never heard her say anything intelligent.

who's looking at her eyes????????
I always value Pilots wit and input
Top

Ahh I see you only notice eyes.

Maybe she should go to